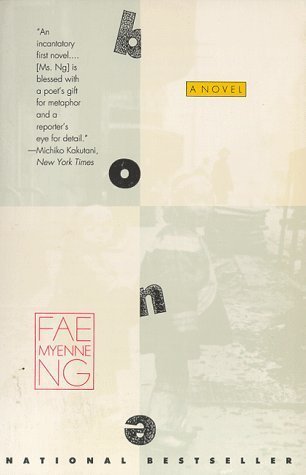 "Remembering the past gives power to the present," says Leila Leong, the narrator of Fae Myenne Ng's incantatory first novel. "Memories do add up." Our memories, she continues, can't bring back the dead, "but they count to keep them from becoming strangers."

Moving backward in time like Harold Pinter's "Betrayal" or the Stephen Sondheim musical "Merrily We Roll Along," "Bone" is a memory-novel, a novel composed of Leila's memories of her family, and her family's memories of their past lives in China and their new lives in the United States. It is a meditation upon the circumstances surrounding the mysterious suicide of Leila's sister Ona and the endless reverberations that that death has had on the entire Leong clan.

As Leila tells us, she is the oldest of the three Leong daughters: Ona was the middle sister; Nina, the youngest. Leila's own father disappeared before her birth, and she regards Leon -- her mother's second husband, and the father of Ona and Nina -- as her own father.

All of the Leongs blame themselves for Ona's death. Leon thinks he's brought bad luck on the family by failing to honor a promise he made to his adoptive father to return his bones to China. Mah, the mother, worries that her own sins -- having an affair with her boss, Tommy Hon -- have doomed the family to unhappiness. And Leila berates herself for not having paid more attention to Ona's problems, for not figuring out that something was wrong.

All three sisters, we learn, have had a difficult time straddling their parents' circumscribed world in San Francisco's Chinatown and the bustling, contemporary world beyond. They feel at once suffocated by Mah and Leon's provincialism and guilty about the freedoms and luxuries they take for granted as young American women; at once resentful of their parents' enslavement to the past and wistful about the history that eludes them here in the United States.

"We're lucky, not like the bondmaids growing up in service, or the newborn daughters whose mouths were stuffed with ashes," Leila says. "The beardless, soft-shouldered eunuchs, the courtesans with the three-inch feet and the frightened child brides -- they're all stories to us. Nina, Ona and I, we're the lucky generation.

Mah and Leon forced themselves to live through the humiliation in this country so that we could have it better. We know so little of the old country. We repeat the names of grandfathers and uncles, but they have always been strangers to us. Family exists only because somebody has a story, and knowing the story connects us to a history."

Each of the Leong daughters has tried to make her own separate peace with her past. Leila has remained at home, working as a counselor at a local school and keeping a watchful eye on her parents. Nina has fled Chinatown altogether: she has moved to New York and taken a job as an airline flight attendant. Ona has found herself stuck midway between the old world and the new: she works as a hostess at Trader Vic's, and dates Osvaldo, the son of her father's former partner and current nemesis. Under fierce pressure from her parents, she breaks off with Osvaldo, an event that will play a pivotal role in her eventual suicide.

The Romeo and Juliet story of Osvaldo and Ona isn't the only melodrama in the Leong family saga. As Leila unpeels the layers of her family's past, we learn that her parents' lives, too, have been fraught with passion, anger and sadness. Summarily abandoned by her first husband, Mah married Leon, knowing his job as a merchant sailor would keep him traveling a good part of the time: such a marriage, she reasoned, would enable her to calibrate her emotional commitment and protect herself from further hurt. Instead, there were loneliness and days and weeks of waiting, and Mah soon fell into an affair with her employer.

When Leon discovered the affair, he moved out of the house on Salmon Alley and took a shabby room at a nearby boarding house. There, he passes the time dreaming up get-rich-quick schemes and silly new inventions: electric sinks, cookie-tin clocks, cash registers with intercoms.

Though a rapprochement of sorts had been arranged, Leon and Mah have recently been estranged again by the very losses that should have made them partners in grief: their life savings in a failed business venture, and Ona, who leaped off the 13th floor of a nearby housing project.

Having grown up in San Francisco's Chinatown herself, Ms. Ng conjures the immigrant world of Mah and Leon with the affectionate knowledge of an insider and the observant unsentimentality of an outsider. She conveys to the reader the incredible hardship of these characters' lives: the long years spent in sweatshops and kitchens and laundry rooms, the hours and hours spent waiting in lines for Social Security and unemployment compensation. We are made to see, through the eyes of Leila, both the remarkable perseverance of her parents in the face of so much difficulty, and the degree to which that perseverance has been built, in equal parts, on naivete and genuine courage.

Blessed with a poet's gift for metaphor and a reporter's eye for detail, Ms. Ng writes with grace, authority and grit. The reader eagerly awaits her next book.